Global schedule reliability in 2020?Q3 has plummeted to 65.0%, according to Sea?Intelligence.

Global schedule reliability in 2020?Q3 has plummeted to 65.0%, according to Sea?Intelligence. This is the lowest-ever quarterly decline recorded by the maritime consultancy - and is lower by a considerable ?14.6 percentage points Y/Y, says CEO Alan Murphy.

Coronavirus and the resulting pandemic was at its peak in 2020-Q2, and schedule reliability was not negatively impacted, according to Murphy. “At that time, we gave one possible explanation - that carriers were finding it easier to manage the schedule integrity of a fewer number of vessels per service string, and that if this was indeed the case, schedule reliability would drop once carriers started ramping up capacity.”

The consultancy has on several occasions highlighted how capacity in 2020 Q3 was above and beyond what should be reasonably expected during this period and how it was in complete dissonance with the global macroeconomic indicators. 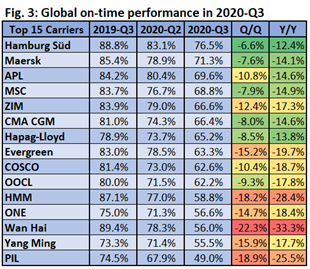 For the period under review, Hamburg Süd was once again the most reliable global carrier, recording 76.5% schedule reliability while PIL was the only carrier below 50.0%, at 49.0%. All top 15 carriers recorded a decline in reliability with nine recording a double digit Q/Q decline. Similarly, all of the carriers recorded a Y/Y decline, with all of them recording a double digit decline. Hamburg Süd recorded the smallest decline of?12.4 percentage points. At the other end, Wan Hai recorded the largest decline of 33.3 percentage points.

Now you are ready to paste and share with friends!

Only Admins can create a honeycomb microsite for the company.